This paper was updated 26/12/2020 with an additional 66 bells by William Dobson, bringing the total number of bells analysed for the period 1750 to 1850 to around 1,050. For most of the additional Dobson bells, the tuning figures were provided by Chris Pickford from Taylors’ records. The plots comparing the hum and prime tuning of Dobson bells with other founders have been updated.

In preparation for a Central Council talk on bell sounds in September 2019 I revisited the history of tuning standards, and in particular the work of Mears and their competitors in the late 18th and 19th centuries. Investigation into the tuning figures of bells of the period shows that although the Mears foundry was commercially successful, the competitors they acquired or put of out business – William Dobson in particular – were much better at casting musical-sounding bells than they were.

True-harmonic bells have their hum, prime and nominal in perfect octaves. The bell shapes and tuning methods needed to achieve this were first discovered by the Hemony brothers in the 17th century in the low countries. The skill was lost on their death, and re-discovered in the late 19th century by Taylors, assisted by Canon Simpson. Bells which are not true-harmonic usually have flat primes and sharp hums. This type of bell is known as old-style. It is a matter of taste, but most listeners prefer true-harmonic partials, especially in smaller bells.

At this period in UK bellfounding partials other than the nominal were not tuned. The Rudhalls had a tuning machine but this was used solely to tune nominals, to ensure bells in a peal were in tune with each other, but not correct the partials in an individual bell. The other founders relied on hammer and chisel, or files, to tune nominals. So the tonal quality of bells of this period relies entirely on the shape of the bell, the foundry’s strickles and the skill of the moulder.

William Mears, the first member of the family to be a bellfounder, cast his first bells in 1777 and then became proprietor of the long-established bellfoundry in Whitechapel. Elphick says about Thomas Mears junior (William’s grandson) ‘He had almost the monopoly of bellfounding as indicated by the enormous number of bells he cast . . . as the business expanded he bought up the smaller foundries . . . in 1825 he acquired the Aldbourne foundry in Wiltshire, then under James Wells . . . in the same year he took over the foundry at Hertford owned by John Briant . . . In 1830 Thomas acquired the great Gloucester foundry of the Rudhalls . . . Finally in 1833 he took over the foundry of William Dobson of Downham Market, Norfolk.’ Although not an acquisition and in an earlier generation, the Knight foundry of Reading moved to London in the early 18th century, was run latterly by Robert Catlin and Thomas Swain, and closed in 1781, just as the expansion of the Whitechapel business began. I have also added bells cast by Lester, Pack or Chapman, the predecessors of William Mears at the Whitechapel foundry.

Mears bells of this period are old-style, and many of their peals are tonally poor, for example St Luke’s Chelsea of 1824, St Barnabas Pimlico of 1849 and the old peal at Taunton with dates from 1816 to 1922. To compare the tonal quality of bells from Mears and the foundries they replaced, I took the average deviation from true-harmonic of the primes and hums for bells from these foundries. The results, in cents or 1/100ths of a semitone, are as follows:

For comparison, I have included bells from Taylors and Whitechapel after they started true-harmonic tuning (excluding any bells cast as old-style), and the Hemony brothers.

In the table, the number of bells is the number of recordings from that founder in my collection, together with the earliest and latest dates of the bells. The average hum and average prime columns give the average deviation of those partials from true-harmonic. Positive deviations are sharp, negative deviations are flat. For example in a Dobson bell, the hum is on average only 11/100ths of a semitone sharp of the double octave. I have also given the standard deviation of the hum and prime tuning from true harmonic, to give an indication of how closely the founder was able to control the partials in each bell.

The founders in the upper part of the table are listed in increasing order of the discrepancies in the hums. Dobson is clearly the best both for hums and primes. Example Dobson peals are St John, Peterborough of 1808, Poole of 1821 and Wisbech of 1823. Briant is next best for hums but his primes are very flat. The average deviations for all five founders are all very much better those for Mears, apart from Briant’s primes. The clear conclusion from these figures is that although Mears were commercially very successful, the foundries they acquired and closed were all much better at producing good-sounding bells than they were.

To further illustrate the skill of William Dobson in particular, here are distribution plots of the deviation of hums and primes from true-harmonic for Dobson and the other founders: 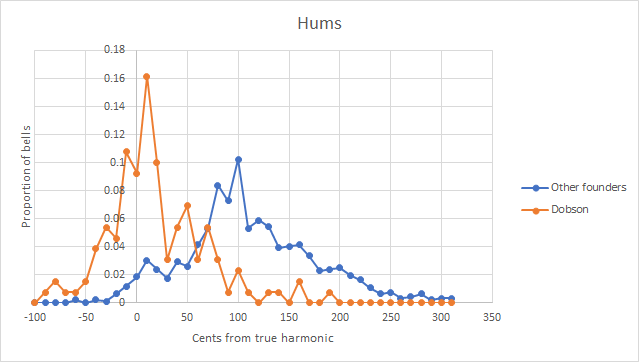 These plots show two key things. First, the peak of the plot is narrower for Dobson bells – much narrower for the hums – demonstrating tighter control of the bell shape and profile. Secondly, the hum plot for Dobson is centred on true-harmonic (the point of zero cents deviation on the horizontal axis). The prime plot for Dobson peaks at true-harmonic but does show a number of bells with flatter primes. Statistical tests on the data show that it is very unlikely indeed that these peaks for Dobson are due to random variation in the partial frequencies.

In the lower part of the table the quality of bells from Taylor and Whitechapel is clear, their average hums and primes are very close to true-harmonic and the standard deviations are much less because the bell shape is better and the hums and primes are tuned. In the case of the Hemony bells the accuracy of the tuning is very good, the hum and prime only have a spread of 4 to 6 cents – but then these are carillon bells for which accurate tuning is needed. The Hemonys had a tuning machine and tuned multiple partials, and of course with these older bells only the best have survived.

Four of the six bells at Fittleworth in Sussex where Canon Simpson was the incumbent and did his initial investigations are Mears (1824, 1884 and 1885) and the front 5 have typically sharp hums and flat primes. As he says in his second paper
“Sitting in my dining-room, with outer and inner doors shut, I was struck by the singularly sweet sound of our six little Fittleworth bells as heard down the chimney. On opening the doors, so as to hear them directly, I observed with surprise that the scale was different; and I finally discovered that what I had heard down the chimney were the hum-notes, which alone found their way, to me by this devious course”.
I wonder if he would have done his investigations and written his papers if his church had had a Dobson six instead? Dobson was very close indeed to solving the true-harmonic puzzle 70 years before it was finally solved by Taylors.