This page was updated on 4/8/2022 with tests of the procedure on a second bell.

This page describes an experiment carried out in July 2022 on identification of bell partials. In a bell of conventional shape, the lowest five partials (hum, prime, tierce, quint and nominal) are always in the same order when ranked by frequency, and almost always have intervals between them that lie in a defined range. Wavanal uses this information to assign partial names when analysing a bell recording. It uses the relationships between upper rim partial frequencies described here to assign the names of the upper partials.

For bells of unconventional shape, such as long-waisted bells, these rules may not hold and the lowest partials may not be in the conventional order of frequency. A way was needed to confirm the identification of the partials in these bells.

In tubular bells, the partials have a completely different arrangement, and these bells are excluded from this investigation.

There are two different ways to think about assignment of partial names, especially for the nominal:

As well as finding a way to confirm the identification of partials in long-waisted bells, another goal of this work was to find a way to identify the set of three partials between nominal and octave nominal.

Bells used in the experiment

The first bell used in the experiment was the clock bell at St Martin, Dorking, previously the fifth in the old ring of eight. The bell is by John Wilnar, dated 1626. It weighs 528kg or 10-1-16 and is 0.988m or 38.88″ in diameter. This bell was chosen because access to it is very easy (it hangs in its own frame above the ringing peal) and all the partials have significant doublets. Doublets are explained below, and the importance of them for this experiment will become apparent.

The main partial frequencies of this bell, listed in order of increasing frequency, are as follows. Frequencies for both halves of each doublet pair are given:

Only two of the three partials between Nominal and Superquint were loud enough to measure under the conditions of the experiment. These two partials between Nominal and Superquint were successfully identified by this experiment. In different bells, the spacing between these partials differs and they can be in a different order of frequency, hence the interest in finding a way to identify them.

The second bell used was the treble of the ringing peal at Dorking. The bell is a modern bell by Taylors, cast 1998. it weighs 219.5kg or 4-1-8 and is 0.638m or 25.13 inches in diameter. Unlike the previous bell, it is difficult to access due to limited space. It was chosen with the expectation that the doublet pairs would be very close in frequency. The partials of the bell are as follows:

The identification of the Group II and Group III modes is uncertain, as explained below.

This subject is covered in detail in my PhD thesis on pages 87 onwards.

Each partial or mode of vibration in a bell has nodes and antinodes across the body of the bell. Nodes are points which have no movement in the direction of vibration, anti-nodes are points of maximum amplitude. The nodes lie in lines from the rim to the crown of the bell, and in circles around the bell parallel to the rim. The so-called rim partials are the partials with an antinode, a circle of maximum vibration amplitude at or near the soundbow. These partials are maximally stimulated by the blow of the clapper and the rim partials from nominal upwards create the strike note. Other partials, including those in groups II and III listed for this bell, have a node in the soundbow. All the modes of vibration have nodal lines from soundbow to crown – the number of nodal lines is given in the table above. For reasons of symmetry, and as explained in Perrin and Charnley’s paper Group theory and the bell, the number of nodal lines is even.

If a bell is not exactly circular, each mode of vibration splits into two modes called doublets, with a slightly different frequency. A demonstration of why this occurs is given here.

Doublets prove to be the key to determining the number of nodal lines.

The procedure used was adapted from Raleigh’s original investigation into bell partials written in 1890. The principle is to strike the bell at multiple points around the rim, and identify, for each strike point and each partial, the relative intensity of each half of the doublet pair for that partial. Rayleigh’s original approach was adapted to take advantage of a laptop for frequency / amplitude measurement, and software for plotting the partials.

The first step was to mark up the rim of the bell with chalk to indicate the strike points. The circumference of the bell used in this experiment is almost exactly 120 inches. The partial investigated with the most nodal lines has 12 nodes and so we need significantly more than 12 strike points. It was convenient to mark the rim every 2 inches to give 60 strike points. The marking does not need to be accurate, it was done with a steel tape.

Here is the first bell used in the experiment with marked-up rim. The markings on the waist of the bell are for a different experiment.

The next step is to take a recording of the bell being struck at every one of the 60 points. The recording was made on a laptop and it is most important that the recorder does not distort or overload. If necessary, move the laptop or recorder further away until clean recordings result. Each blow should be roughly the same strength, and sufficiently heavy to stimulate the upper partials. A 1.5kg lump hammer was used, swung from about 5cm away. It also helps if each blow is at the same height on the soundbow. The analysis done on the recordings copes with minor differences in the strike position and heaviness of the blow.

This bell had a doublet on every partial of interest, though some were very closely spaced (0.3Hz apart for the hum partial). If a bell being investigated doesn’t have the required doublets, a mole grip or g-clamp on the soundbow will introduce sufficient asymmetry to provide the doublets required. It is worth making and analysing a few preliminary recordings at various points around the circumference to decide if this is required.

At least 10 seconds must elapse between each blow, to allow for sufficiently accurate frequency analysis. In this experiment, the recording was done in one pass. To keep track of progress and to help with analysis of the recordings, I called out the number of every tenth position before making the blow.

Once the recording was complete, for convenience in analysis I split it into 60 separate recordings, each identified in the filename by the position number from 0 to 60.

Analysis of the recordings – Wilnar bell

The first step in the process was to use Wavanal to determine the frequencies of each half of the doublet for each partial. The Interval (Hz) in Wavanal was set to 0.1Hz (which requires 10 seconds of sound). For some partials it was necessary to analyse several different recordings in the set of 60 to identify both halves of the doublet.

A detailed explanation is given for the nominal partial. Analysis for all the partials followed the same approach. 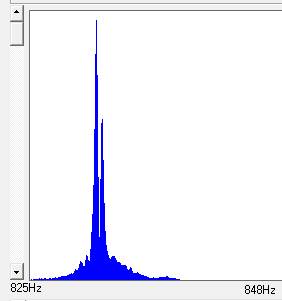 The two halves of the doublet can be seen. The amplitudes of both doublet frequencies were obtained by clicking on them and entering the amplitude values into a spreadsheet against the blow position of the recording. As the recordings are analysed, it becomes clear that amplitude shifts back and forth between the halves of the doublet as the blows proceed around the bell – sometimes one is stronger, sometimes the other.

It is obvious from this plot how amplitude moves from one half of the doublet to the other as we proceed around the bell, moving between nodes and antinodes for each half of the pair. It is also clear that there are 8 node / antinode pairs around the rim, showing that this partial has been correctly identified as the nominal. What is not immediately obvious is that this chart is cyclic: the position at 120 inches is the same position as 0 inches. In fact the easiest way to visualise the pattern is to plot the same data for one half of the doublet as a polar plot against distance around the bell:

The pattern of eight nodes and antinodes becomes immediately obvious.

The only partials that were handled a little differently were the partials between Nominal and Superquint. All four frequencies are very close and it was not obvious how to pair them up as doublets. Two of the four showed clear periodicity around the rim. The other two frequencies were assigned as the other half of the doublet so as to produce the clearest polar pattern.

Here are polar plots for all the partials investigated. The rim partials are given first and it is clear how each partial in the series has two more nodal lines than the previous one:

Here are the other partials, without an antinode at the soundbow.

Despite the simplicity of the approach used, the results clearly show the nodal pattern of each partial and allowed the two partials between Nominal and Superquint to be identified.

Here is a picture of the bell marked up (in felt-tip) for the experiment. Access around the bell to mark it up and strike it is very restricted.

The bell is approximately 75 inches in circumference and the rim was marked every inch. The recordings were taken on a mobile phone. The bell was struck with a ball-peen hammer weighing 540g, using the ball to get as close as possible to the marked strike point. It was difficult to maintain consistent strength of blows due to lack of space around the bell.

The recordings were analysed in an identical fashion to those of the first bell, and the results for the rim partials and the prime were just as satisfactory:

Work continues to refine the experimental procedure and improve the results for non-rim partials.

Lord Rayleigh, On Bells, The London, Edinburgh, and Dublin Philosophical Magazine and Journal of Science, Fifth Series, Vol 29, No 176 (January 1890), reprinted in Rossing’s Acoustics of Bells

Hibbert W. A., The Quantification of Strike Pitch and Pitch Shifts in Church Bells, PhD Thesis (2008)